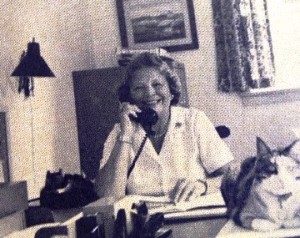 Horizon House was founded in 1952 as a support group for former mental hospital patients who had been released from psychiatric facilities into the community. The agency was created largely as a result of the efforts of innovator Marcella Schmoeger and a small group of concerned citizens she enlisted in her campaign to create community supports for people coming out of mental hospitals.

Ms. Schmoeger’s awareness of the need for support came about during her recovery from an unusual medical complication that caused her to be hospitalized briefly at Friend’s Hospital in the early 1950s. During that time, she witnessed numerous instances of psychiatric patients remaining institutionalized longer than was necessary because they lacked the supports needed to live in the community. At the same time, she came to realize that mental hospital patients have the same need for acceptance and the opportunity to live satisfying, productive lives in the community—as everyone does.

She was so moved by the difficulties these individuals experienced that she returned home determined to help. A devout Quaker, she took her concerns to the Lansdowne Meeting of the Society of Friends. There, a small group motivated by their own concerns for people with mental illness stepped forward to work with her to address this increasingly serious social problem. Their dedication and boundless energy laid the foundation for Horizon House.

Throughout her life, Marcie was committed to living each day to its fullest. She worked tirelessly to realize her vision of a better life for people with mental illness. A true pioneer, she believed each person was entitled to a fulfilling life in the community.

Over the years, Horizon House has expanded its scope of service both geographically and programmatically, in response to individual and community needs. While we continue to serve people with mental illness, we also now serve adults with intellectual disabilities as well as homeless men and women. Annually, we provide services and hope for a better future to more than 5,000 individuals.

Today, Horizon House continues to be a  pioneer recognized for our innovative services and quality of care. The people who are Horizon House today – persons served, staff, and board members alike – are more committed than ever to the vision of our founders and to making extraordinary differences in the lives of others well into the future.