Chairman of the Board of Directors 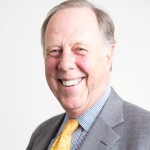 John feels both humbled and proud of his association with Horizon House. When first introduced to the organization, he was working to facilitate apartment rentals in Wilmington for people capable of supervised, yet independent, living. John was asked to consider joining the Board of Directors of Horizon House. After researching the organization and visiting several locations in Philadelphia, he happily agreed.

To work in a leadership capacity to achieve the goals of Horizon House has been an honor for John, who has seen the institution grow both dramatically and positively. He says, “The important thing for Horizon House’s continued growth is to stay true to our mission and match each person’s goals in treatment, recovery and care consistent with their abilities.” He says his guiding light is to give as much to the organization as the people at Horizon House provide for each individual they serve.

John has served on the board of directors or as an officer of many for-profit and nonprofit organizations, and was recently President of the Philadelphia Society for Promoting Agriculture, Clerk of Committee of George School, Director of the Arch Street Meeting House Preservation Trust, and Director and Founding Member of the Decorative Arts Trust.